The 5 Key Features of a Minimal House

The layout of the minimal house should be compact, not crowded in any way - in that case, it would remind you of a tiny studio flat. The aim is the conscious arrangement of the small spaces, then the smart furnishing, in order to create the possible largest parts in which light can easily spread making a cozy, positive atmosphere.
From this, it's easy to make a conclusion saying that the next key feature of minimal house is letting light inside - and that conclusion is right! The larger, frameless windows and glass surfaces can flood the inside of the minimal house with brightness, meanwhile making a simple, clean look to the building itself as well - what's more, in an even more fortunate case, you can also give thanks to huge glass parts for the stunning panorama if you have a fine location in your city. If your home is more close to the outskirts, try to get more and more plants around yourself, and then it could be the merging with nature that'll take your breath.

In a lot of minimal houses, it is not difficult to notice that instead of vertical spaces, horizontal spaces took more role - so, instead of a large one-floor building, a rather narrow, but leveled design was actualized. The number of square meters won't grow by stacking up the spaced that would be together in a simple, one-floor building, however, it helps the conscious space creating a lot.

In modern architecture, it is indispensable to give enough attention to choose the proper type and quality of the materials being used - and of course, we must take it into consideration in case of a minimal house with extra care.

It is the continuity that is the most prominent feature of the minimal house while looking at it from the outside: the exterior is covered with one kind of material without any pattern or repetition and involving other elements. If a right covering material was chosen, this will grant an immensely elegant, yet homelike and positive look to the minimal house, also reflecting professionality and simplicity.

Last but not least, while the big glass surfaces are increasing the size of the house on the inside, the continuity in material usage does the same on the outisde. 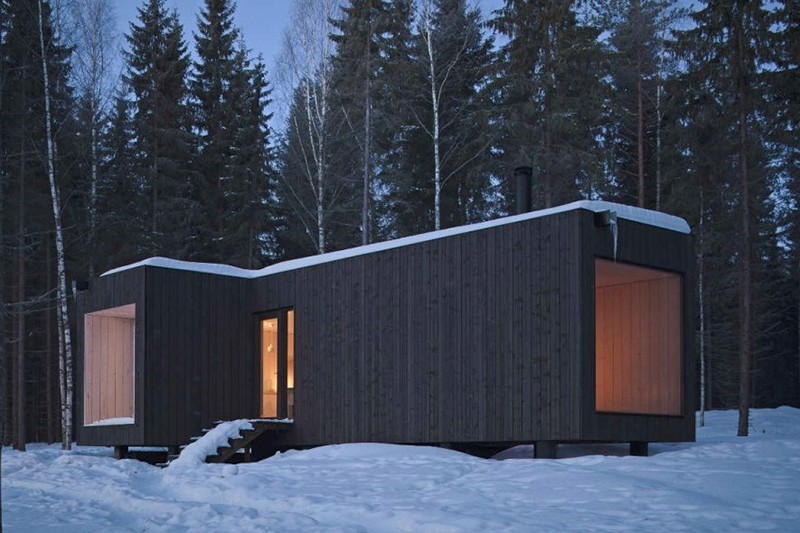 We already covered the importance of windows; they let brightness in while making the house larger. However, it's also important to note what a big priority it is to make the nearness of the glass surfaces remain free - do not store items like vases, boxes next to it, not even on the ledge (but often it does not exist in minimal house), and it's also not recommended to apply thick curtains. By taking note of these, more of the major features of the minimal house - simplicity, compact spaces, and clean surfaces - will remain respected,
As you can also inspect that below, during the designing of a minimal house, the simple angular shapes enjoy priority over curved shapes, since the latter provides fewer choices for smart furnishing.
The topic of merging with nature was mentioned before, and we can not emphasize enough how important it is to not to forget the flora in the planning of interior and the arrangement - they have a significant role in making any room or place ', they can breathe life into every grandiose architectural creation.

After the building itself is once finished, you can not change its sizes - in terms of numbers. Even if the financial background is available, the reconstruction carries several unpleasant effects and difficulties. Fortunately, it's not the only way to change the spaces in a house, and in case of a minimal house, playing with spaces in the smartest possible way is really the key part.
Of course, let there be any creativity, arrangement options have an end too, but there is a clever solution out there that could help to preserve the minimalist style as well as the fully furnished status of the minimal house, while still opening up a bunch of new opportunities - this clever solution is the foldable furniture.
Who hasn't met any of these yet, now may imagine absurd images and weird creatures, but there's nothing to worry about: these foldable pieces of furniture are relatively new to the market of furnishing, still taking bigger and bigger role in smart space creation, since they can maximize the meaning of the notion 'functionality': they could be transformed, folded into each other, pulled out from the wall, turn over into a decoration, etc.

A smart combination of colors could hold a large amount of expressive power, talking about literally anything in the world - taking a minimal house, colors could show style, elegance, and pureness.
In most constructions or reconstructions, the focus is too often placed on forms and shapes - it'd be worth it to give enough time to deal with colors. By hearing "minimalism", most of us would assume the using of only white color. Eventually, we should go further: the plain white walls could give sterile, dull feeling to something that would be a lovely home.

A good option in vitalizing the appearance of a minimal house is the usage of one highlight color, when one side of wall gets a more lively, vivid color than the other sides - or the same with the lower part of the walls. If harmony is a main goal, this highlight color is often the color of the furniture. These are just some basic ideas, there might be a lot more in the mind of architects and designers, let's brainstorm about it!

If white becomes the final color in the end, try equipping your home with colorful textiles (curtains, pillows, rugs, etc.) along with the furniture!


If you want to read even more about the use of color, click and read our former post about the topic!

Have you managed to get inspired? At the webpage of At Home Budapest, you can find several residences where you can turn your ideas into reality!